I wish I'd taken pics to post here. I made homemade Challah bread, banana nut bread, carrot cake, wedding cookies, mocha wedding cookies, peanut butter truffles, dark chocolate espresso truffles, rum truffles (which I have yet to roll and dip), lemon shortbread cookies, and I crocheted a basket...on which I still have to finish the trim. I also reverse-engineered a creamy key lime sauce for my asparagus...proud of that one especially because I've never tried the key lime sauce in question. I made Alton Brown's recipe 40 Cloves and a Chicken, cooked in my new cast iron Dutch oven. Incredible!
Posted by laurelei at 11:28 AM 2 comments: Links to this post

Pay Attention - There Will Be a Test Later

Millimeter wave. Backscatter x-ray. The TSA and their pornographic scans and molesting hands. Know what I'm talking about?
http://johnnyedge.blogspot.com/2010/11/these-events-took-place-roughly-between.html
Read it. Watch it. Forward it.
And for those wondering, I'll be driving.
Posted by laurelei at 4:01 PM No comments: Links to this post

Stumbled across this blog tonight and fell in love. Scroll back through her posts and watch her art change and grow. I love the woven watercolors. Check her out.
Linky.
Posted by laurelei at 10:13 PM 1 comment: Links to this post

Love this jewelry store on Etsy - look for a secret admirer necklace and an Alis Grave nil pendant. Charms are cool. :)
Posted by laurelei at 1:07 PM No comments: Links to this post

OK, so I'm getting inked for the first time tomorrow, and I'm so totally freaking jazzed about it. Anybody looking for an amazing tattoo artist, check out Christopher G at Peackcock's Tattoo. I'll show you pics tomorrow. Promise.
Posted by laurelei at 9:39 PM No comments: Links to this post

The Orlando Sentinel has the best hurricane tracking map I've encountered online. Check it out.
http://www.orlandosentinel.com/weather/hurricane/orl-hurricane-storms-map,0,814603.htmlpage
Posted by laurelei at 6:26 PM No comments: Links to this post

Our Father, Who Art In Heaven

Picture it:
A poor neighborhood where the people work so hard they get old young, just to eat. Just to live. One hot July night in this dusty small town, two men commit a home invasion. The father is beaten, bound and forced to watch his son killed and every female member of his family beaten and raped repeatedly...even his five-year-old daughter, who dies from her wounds before the men are finished with her.
Are you offended? Do you want them caught? Do you want them to stand trial? Do you want to see them jailed for their crimes, or face the death penalty? No matter your idea of punishment, we can all agree they should be stopped, yes? Before they pick another house...before they pick my house, or yours.
Well, it wasn't two men. It was two hundred. And it wasn't one family, it was two hundred women and girls and babies. And this wasn't the first time. This is rape as a weapon of war.
Are you scared now?
I am.
And I want someone to stop them. NOW.
They are my neighbors, my friends, these girls. These families. In this globally connected world, they are all my neighbors. It could've been my house. Dumb luck made me the daughter of my parents and not the daughter of her parents. There, but for the grace of God go I. It could've been me. They could've ALL been me. Or my little girl.
Did you see the headlines in the news? I know CNN reported it. Did you understand what's happening out there? They're praying for help. Those are somebody's babies. That is somebody's mother. Somebody's wife. It's me, and it's you. Why aren't there protests, and demands for answers...for solutions? Why aren't we screaming for blood, for help, for it to stop?
Some of us are. We need your voice too. THEY need your voice. The Congo, Rwanda, Darfur...it's happening right now. The whole world swore after Hitler that we'd never let such a thing happen again. Did we only mean we'll never let somebody kill using gas chambers again? That it's OK, as long as they don't use concentration camps? It's happening, Gentle Reader. Last night,
right now, this VERY minute. Do you get it? Somebody should have saved the Jews. Somebody should have STOPPED IT. Dontcha think?
www.savedarfur.org

Photo by Jack Corn, courtesy of The US National Archives; no known copyright restrictions.
Posted by laurelei at 8:25 AM No comments: Links to this post 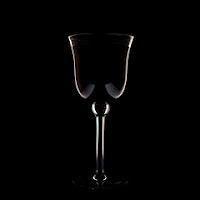 OK, so I'm halfway through my second glass of Takara Plum Wine, and I had to drop by and rave. If you haven't ever tasted this stuff, please, do. I haven't had it for a couple of years, and I'm surprised all over again by how good it is.
That's all.
Oh, and I'm baking brownies. Sucks to be you.
(Original photo by Tony2, some rights reserved.)
Posted by laurelei at 7:16 PM No comments: Links to this post

I don't know if any of you crochet, but I don't want to lose these links, so I'll post 'em here where I can find 'em. Assuming I can find my blog when I need it.
Posted by laurelei at 5:00 PM No comments: Links to this post

So...I'm Obviously Sucking at This 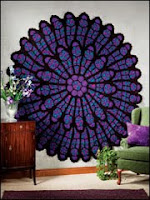 Would you believe I forgot I have a blog? No? Yeah, me either. You wouldn't be so surprised it's taken me this long to post if you'd seen the number of crochet UFOs in my closet. (UFO = unfinished object)

My current work-in-progress is the Cathedral Rose Window Afghan from Annie's Attic. I've wanted to make this thing for YEARS. Eighty-something dollahs later, there's a little voice in my head warning me not to let it go the way of my blog. LOL Is it possible to have OCD and ADD? I'm obsessed with things for as long as I can remember them.
So the two new granddaughters are about a year and a half old, and both are as lovely as can be. I previously posted a pic of Zoey with a headless Elizabeth in the background. I promise to post a pic of Liebe tonight, if for no other reason than she'll be howling at the inequality ten years from now. Anyway, since that post, I acquired another grand baby...the first grandson, William. I call him Chuck. He looks like Charlie Brown, big head and all. He's so handsome! One big dimple in his right cheek, and he shows it off all the time because he's always smiling. Good thing her third baby is a happy one, with all of them under the age of four. If he hadn't been, I'm sure she would've traded them all for whatever is behind door number four. I know I would've.
OK, so I'll update with pics later. Tonight. Really.
Edit: I promised pics. Here are all four gorgeous grands. 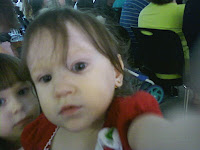 This is Zoey with Elizabeth's head. 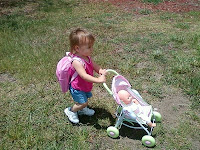 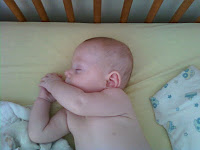 This is Will.
Posted by laurelei at 4:21 PM No comments: Links to this post 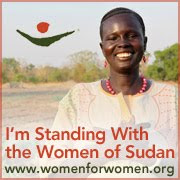